Aloud: Aloud is an American indie rock band known for its songwriting and vocal prowess, as well as using a two lead singer approach.Founded in 2002 by Jen de la Osa and Henry Beguiristain (lead vocals, guitar, keys) in Boston, Massachusetts, the group is rounded out by bassist/backing vocalist Charles Murphy and drummer Chris Jago. In 2017, the band expanded its lineup to include Alanah Ntzouras on saxophone and Vanessa Acosta on trumpet.

Alauddin Khalji: ʿAlāʾ ud-Dīn Khaljī , born as Ali Gurshasp, was the most powerful emperor of the Khalji dynasty that ruled the Delhi Sultanate in the Indian subcontinent. 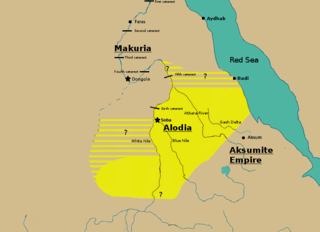 Alodia: Alodia, also known as Alwa , was a medieval Nubian kingdom in what is now central and southern Sudan. Its capital was the city of Soba, located near modern-day Khartoum at the confluence of the Blue and White Nile rivers.