Anarchy: Anarchy is the state of a society being freely constituted without authorities or a governing body. It may also refer to a society or group of people that entirely rejects a set hierarchy. 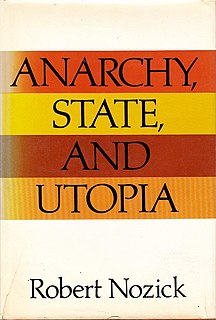 Anarchy, State, and Utopia: Anarchy, State, and Utopia is a 1974 book by the American political philosopher Robert Nozick. It won the 1975 US National Book Award in category Philosophy and Religion, has been translated into 11 languages, and was named one of the "100 most influential books since the war" by the UK Times Literary Supplement.In opposition to A Theory of Justice (1971) by John Rawls, and in debate with Michael Walzer, Nozick argues in favor of a minimal state, "limited to the narrow functions of protection against force, theft, fraud, enforcement of contracts, and so on." When a state takes on more responsibilities than these, Nozick argues, rights will be violated.

Anarchy Online: Anarchy Online is a massively multiplayer online role-playing game published and developed by Norwegian video game development company Funcom. Released in the summer of 2001, the game was the first in the genre to include a science-fiction setting, dynamic quests, instancing, free trials, and in-game advertising.