Arabic: Arabic or عَرَبِيّ‎, ʿarabīy, [ˈʕarabiː] (listen) or [ʕaraˈbij]) is a Semitic language that first emerged in the 1st to 4th centuries CE. It is now the lingua franca of the Arab world. It is named after the Arabs, a term initially used to describe peoples living in the area bounded by Mesopotamia in the east and the Anti-Lebanon mountains in the west, in Northwestern Arabia and in the Sinai Peninsula.

Arabic alphabet: The Arabic alphabet , or Arabic abjad, is the Arabic script as it is codified for writing Arabic. It is written from right to left in a cursive style and includes 28 letters. 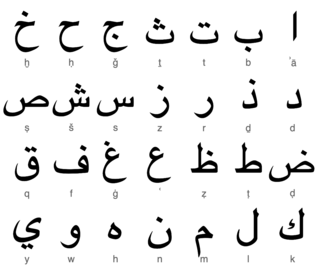 Arabic script: The Arabic script is a writing system used for writing Arabic and several other languages of Asia and Africa, such as Persian , Uyghur, Kurdish, Punjabi, Sindhi, Balochi, Pashto, Lurish, Urdu, Kashmiri, Rohingya, Somali, and Mandinka, among others. Until the 16th century, it was also used to write some texts in Spanish.