Argueil: Argueil is a commune in the Seine-Maritime department in the Normandy region in northern France.

Arguendo: Arguendo is a Latin legal term meaning for the sake of argument. "Assuming, arguendo, that ..." and similar phrases are used in courtroom settings and academic legal settings, and occasionally in other domains, to designate provisional and unendorsed assumptions that will be made at the beginning of an argument in order to explore their implications. 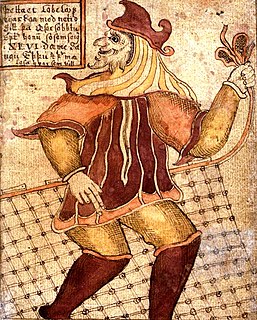 Loki: Loki is a god in Norse mythology. Loki is in some sources the son of Fárbauti and Laufey, and the brother of Helblindi and Býleistr.

Argument: In logic and philosophy, an argument is a series of statements , called the premises or premisses (both spellings are acceptable), intended to determine the degree of truth of another statement, the conclusion. The logical form of an argument in a natural language can be represented in a symbolic formal language, and independently of natural language formally defined "arguments" can be made in math and computer science.