Armenian: Armenian may refer to: 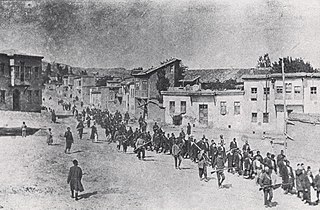 Armenian Genocide: The Armenian Genocide was the systematic mass murder and expulsion of ethnic Armenians carried out in Turkey and adjoining regions by the Ottoman government during World War I. Although sporadic massacres of Armenians began in mid-1914, the starting date of the genocide is conventionally held to be 24 April 1915, the day that Ottoman authorities rounded up, arrested, and deported from Constantinople to the region of Angora (Ankara), hundreds of Armenian intellectuals and community leaders, most of whom were eventually murdered. The genocide, ordered by the Three Pashas as part of a process of forced Turkification, was implemented in two phases.

Armenians: Armenians are an ethnic group native to the Armenian Highlands of Western Asia.Armenians constitute the main population of Armenia and the de facto independent Artsakh. There is a wide-ranging diaspora of around 5 million people of full or partial Armenian ancestry living outside modern Armenia. 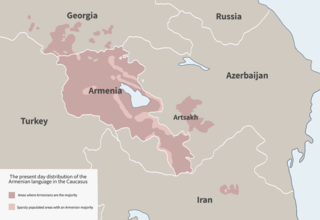 Armenian language: Armenian is an independent branch of the Indo-European language, of which it is the only language. It is the official language of Armenia.