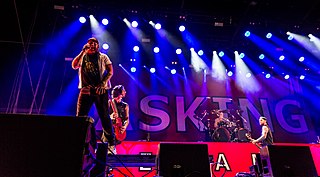 Asking for It (Hole song): "Asking for It" is a song by the American alternative rock band Hole. It is the fourth track on the band's second studio album, Live Through This, released on April 12, 1994 on Geffen Records.

Asking for Flowers: Asking for Flowers is the third studio album by Canadian singer-songwriter Kathleen Edwards. The album was released March 4, 2008, and was well received by critics, similarly to her first two albums released under Zoë Records, Failer and Back to Me.

Asking Questions: Asking Questions is a crime novel by H. R. F. Keating. It is the twentieth novel in the Inspector Ghote series and the twenty-second book, due to the publication of two short story collections.

Asking Alexandria discography: The following is the complete discography of the British band, Asking Alexandria. Their releases have so far consisted of six full-length studio albums, two EPs, one live album, one remix album, thirty-five singles, twenty-three music videos and four other appearances.