Babylon: Babylon was the capital city of Babylonia, a kingdom in ancient Mesopotamia, between the 18th and 6th centuries BC. It was built along the left and right banks of the Euphrates river with steep embankments to contain the river's seasonal floods. Babylon was originally a small Akkadian town dating from the period of the Akkadian Empire c. 2300 BC. The town became part of a small independent city-state with the rise of the First Babylonian dynasty in the 19th century BC. The Amorite king Hammurabi created a short-lived empire in the 18th century BC. He built Babylon into a major city and declared himself its king. 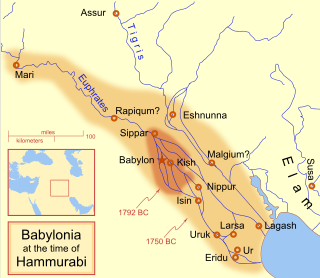 Babylonia: Babylonia () was an ancient Akkadian-speaking state and cultural area based in central-southern Mesopotamia . A small Amorite-ruled state emerged in 1894 BC, which contained the minor administrative town of Babylon. 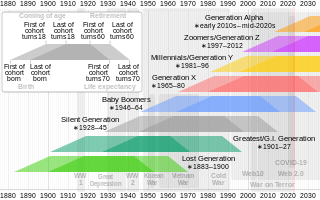 Baby boomers: Baby boomers are the demographic cohort following the Silent Generation and preceding Generation X. The generation is generally defined as people born from 1946 to 1964, during the post–World War II baby boom. The baby boom has been described variously as a "shockwave" and as "the pig in the python." Baby boomers are often parents of early Gen Xers and Millennials.In the 1960s and 1970s, in the West, as this relatively large number of young people entered their teens and young adulthood—the oldest turned 18 in 1964—they, and those around them, created a very specific rhetoric around their cohort and the changes brought about by their size in numbers, such as the counterculture of the 1960s.

Babymetal: Babymetal (stylized in all caps) is a Japanese kawaii metal band. The band consists of Suzuka Nakamoto as "Su-metal" (Vocal and Dance) and Moa Kikuchi as "Moametal" (Scream and Dance).