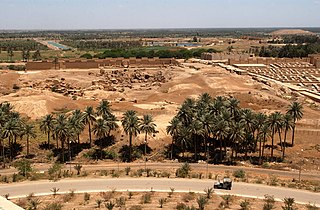 Babylon: Babylon was the capital city of Babylonia, a kingdom in ancient Mesopotamia, between the 18th and 6th centuries BC. It was built along both banks of the Euphrates river, with steep embankments to contain the river's seasonal floods. Babylon was originally a small Akkadian town dating from the period of the Akkadian Empire c. 2300 BC. The town became part of a small independent city-state with the rise of the First Babylonian dynasty in the 19th century BC. The Amorite king Hammurabi created a short-lived empire in the 18th century BC. He built Babylon into a major city and declared himself its king.

Babylonia: Babylonia () was an ancient Akkadian-speaking state and cultural area based in central-southern Mesopotamia . A small Amorite-ruled state emerged in 1894 BC, which contained the minor administrative town of Babylon. 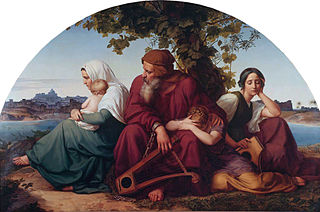 Babylonian captivity: The Babylonian captivity or Babylonian exile is the period in Jewish history during which a number of people from the ancient Kingdom of Judah were captives in Babylon, the capital of the Neo-Babylonian Empire. After the Battle of Carchemish in 605 BCE, King Nebuchadnezzar of Babylon besieged Jerusalem, resulting in tribute being paid by King Jehoiakim.

Babylonian astronomy: Babylonian astronomy was the study or recording of celestial objects during early history Mesopotamia. These records can be found on Sumerian clay tablets, inscribed in cuneiform, dated to around 1000 BCE.In conjunction with their mythology, the Sumerians developed a form of astronomy/astrology that had an influence on Babylonian culture.