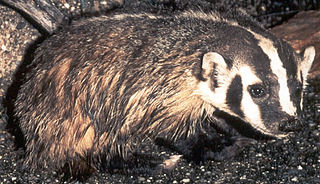 Badger: Badgers are short-legged omnivores in the families Mustelidae , and Mephitidae (which also includes the skunks). Badgers are a polyphyletic grouping, and are not a natural taxonomic grouping: badgers are united by their squat bodies, adapted for fossorial activity.

Badge of shame: A badge of shame, also a symbol of shame, a mark of shame or a stigma, is typically a distinctive symbol required to be worn by a specific group or an individual for the purpose of public humiliation, ostracism or persecution. The term is also used metaphorically, especially in a pejorative sense, to characterize something associated with a person or group as shameful.In England, under the Poor Act 1697, paupers in receipt of parish relief were required to wear a badge of blue or red cloth on the shoulder of the right sleeve in an open and visible manner, in order to discourage people from collecting relief unless they were desperate, as while many would be willing to collect relief, few would be willing to do so if required to wear the "shameful" mark of the poor in public.The yellow badge that Jews were required to wear in parts of Europe during the Middle Ages, and later in Nazi Germany and German-occupied Europe, was effectively a badge of shame, as well as identification.