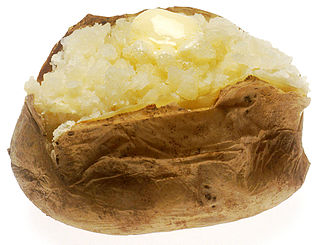 Baked potato: A baked potato, known in some parts of the United Kingdom as jacket potato, is a type of potato dish. When well cooked, a baked potato has a fluffy interior and a crisp skin.

Baked beans: Baked beans is a dish traditionally containing white beans which are parboiled and then baked at a low temperature for a lengthy period of time in some sort of sauce. This is the usual preparation of the dish in the United States when not using canned beans. 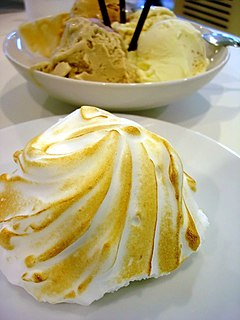 Baked Alaska: Baked Alaska, also known as omelette norvégienne, omelette surprise, or omelette sibérienne depending on the country, is a dessert consisting of ice cream and cake topped with browned meringue. The dish is made of ice cream placed in a pie dish, lined with slices of sponge cake or Christmas pudding, and topped with meringue.

Baked Alaska (activist): Anthime "Tim" Gionet , more commonly known as Baked Alaska, is an American neo-Nazi, anti-semitic conspiracy theorist, and social media personality who gained attention through his advocacy on behalf of alt-right and white supremacist ideology, and through his promotion of anti-Jewish conspiracy theories such as white genocide and Jewish control of the media. Prior to his 2016 transformation into an alt right activist, Gionet was a commentator for BuzzFeed, where he supported libertarian and progressive political positions and marched in support of Black Lives Matter. 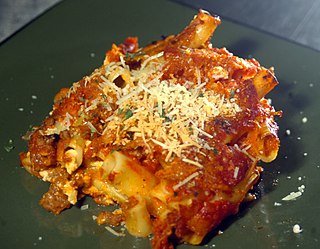 Baked ziti: Baked ziti is a popular casserole with ziti pasta and a Neapolitan-style tomato-based sauce characteristic of Italian-American cuisine. It is a form of pasta al forno.