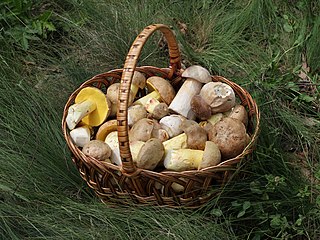 Basket: A basket is a container that is traditionally constructed from stiff fibers and can be made from a range of materials, including wood splints, runners, and cane. While most baskets are made from plant materials, other materials such as horsehair, baleen, or metal wire can be used.

Basketball: Basketball, colloquially referred to as hoops, is a team sport in which two teams, most commonly of five players each, opposing one another on a rectangular court, compete with the primary objective of shooting a basketball in diameter) through the defender's hoop (a basket 18 inches (46 cm) in diameter mounted 10 feet (3.048 m) high to a backboard at each end of the court) while preventing the opposing team from shooting through their own hoop. A field goal is worth two points, unless made from behind the three-point line, when it is worth three.

Basket-hilted sword: The basket-hilted sword is a sword type of the early modern era characterised by a basket-shaped guard that protects the hand. The basket hilt is a development of the quillons added to swords' crossguards since the Late Middle Ages.

Basketball moves: Basketball moves are generally individual actions used by players in basketball to pass by defenders to gain access to the basket or to get a clean pass to a teammate to score a two pointer or three pointer.

Basket of deplorables: "Basket of deplorables" is a phrase from a 2016 presidential election campaign speech delivered by Democratic nominee Hillary Clinton on September 9, 2016, at a campaign fundraising event, which she used to describe half of the supporters of her opponent, Republican nominee Donald Trump saying "They're racist, sexist, homophobic, xenophobic". The next day, she expressed regret for "saying half", while insisting that Trump had deplorably amplified "hateful views and voices".