Beijing: Beijing ), alternatively romanized as Peking ( PEY-KING), is the capital of the People's Republic of China. It is the world's most populous capital city, with over 21 million residents within an administrative area of 16,410.5 km2. 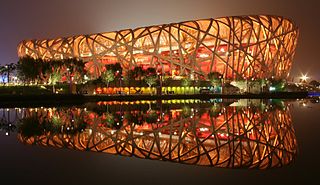 Beijing Subway: The Beijing Subway is the rapid transit system of Beijing Municipality that consists of 23 lines including 19 rapid transit lines, two airport rail links, one maglev line and one light rail line, and 405 stations. The rail network extends 699.3 km across 12 urban and suburban districts of Beijing and into one district of Langfang in neighboring Hebei province.