Biblical canon: A biblical canon or canon of scripture is a set of texts which a particular Jewish or Christian religious community regards as authoritative scripture. The English word canon comes from the Greek κανών, meaning "rule" or "measuring stick". 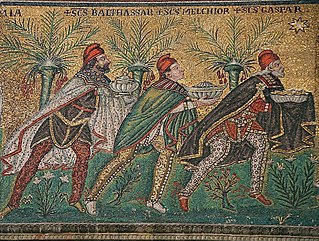 Biblical Magi: The biblical Magi , also referred to as the (Three) Wise Men or (Three) Kings, were – in the Gospel of Matthew and Christian tradition – distinguished foreigners who visited Jesus after his birth, bearing gifts of gold, frankincense and myrrh. They are regular figures in traditional accounts of the nativity celebrations of Christmas and are an important part of Christian tradition.

Biblical apocrypha: The biblical apocrypha denotes the collection of apocryphal ancient books thought to have been written some time between 200 BC and 400 AD. Most Christian Churches include some or all of the same texts within the body of their version of the Old Testament.Although the term apocryphal had been in use since the 5th century, it was in Luther's Bible of 1534 that the Apocrypha was first published as a separate intertestamental section.

Biblical Hebrew: Biblical Hebrew , also called classical Hebrew, is an archaic form of Hebrew, a language in the Canaanite branch of Semitic languages, spoken by the Israelites in the area known as Israel, roughly west of the Jordan River and east of the Mediterranean Sea. The term "Hebrew" was not used for the language in the Bible, which was referred to as שפת כנען (sefat kena'an, i.e.

Biblical inerrancy: Biblical inerrancy is the belief that the Bible "is without error or fault in all its teaching"; or, at least, that "Scripture in the original manuscripts does not affirm anything that is contrary to fact". Some equate inerrancy with biblical infallibility; others do not.