The Bookshop: The Bookshop is a 1978 novel by the British author Penelope Fitzgerald. It was shortlisted for the Booker Prize.

Bookshop Memories: "Bookshop Memories" is an essay published in 1936 by the English author George Orwell. As the title suggests, it is a reminiscence of his time spent working as an assistant in a second-hand bookshop. 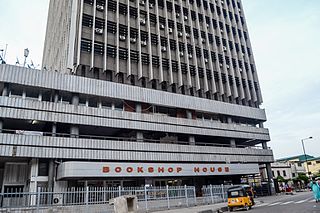 Bookshop House: Bookshop House is a building in the Lagos Island located at Northeastern part of Broad street at Odunlami street. It was designed by Godwin and Hopwood Architects and built in 1973.

The Bookshop (film): The Bookshop is a 2017 drama film written and directed by Isabel Coixet, based on the 1978 novel of the same name by Penelope Fitzgerald. The film stars Emily Mortimer, Patricia Clarkson, and Bill Nighy.The film was shot in Portaferry and Strangford, County Down, Northern Ireland, and in Barcelona during August and September 2016.

Bookshop (company): Bookshop is an online book marketplace designed to support independent bookstores. It is certified as a B Corporation with the mission “to benefit the public good by contributing to the welfare of the independent literary community".