Bother: Bother may refer to: Bother , a 2003 song by Stone Sour Bother!

Bother (song): "Bother" is the second single from the hard rock band Stone Sour's self-titled debut album. It was originally released as a solo song by frontman Corey Taylor, but the billing was later changed to Stone Sour. 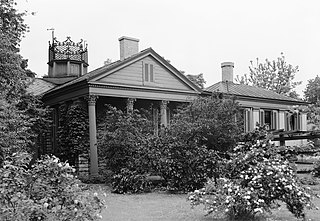 Botherum: Botherum was built for Madison C. Johnson in 1850 or 1851 by John McMurtry, a well-known architect and builder based in Lexington. The house was intended, in part, as a shrine to Johnson's late wife Sally Ann, a sister of Cassius Marcellus Clay who died giving birth in 1828.Although McMurtry was known for his Gothic Revival architecture, and is credited with establishing the popularity of that style in central Kentucky, Botherum shows an unusual combination of Greek, Roman, and Gothic architectural elements.A large ginkgo tree that stands on the property is said to have been a gift to Johnson from Henry Clay.