Brace: Brace or bracing may refer to: 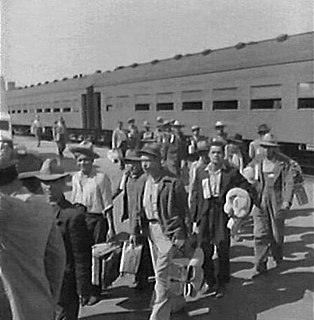 Bracero program: The Bracero program was a series of laws and diplomatic agreements, initiated on August 4, 1942, when the United States signed the Mexican Farm Labor Agreement with Mexico. For these farmworkers, the agreement guaranteed decent living conditions (sanitation, adequate shelter and food), and a minimum wage of 30 cents an hour, as well as protections from forced military service, and guaranteed part of wages were to be put into a private savings account in Mexico; it also allowed the importation of contract laborers from Guam as a temporary measure during the early phases of World War II.The agreement was extended with the Migrant Labor Agreement of 1951, enacted as an amendment to the Agricultural Act of 1949 (Public Law 78) by Congress, which set the official parameters for the bracero program until its termination in 1964.A 2018 study published in the American Economic Review found that the Bracero program did not have any adverse impact on the labor market outcomes of American-born farm workers. 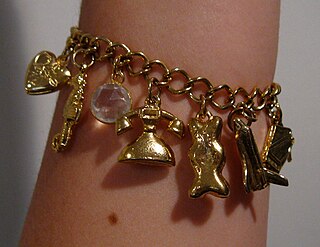 Bracelet: A bracelet is an article of jewellery that is worn around the wrist. Bracelets may serve different uses, such as being worn as an ornament.

Braceface: Braceface is a Canadian-American-Chinese animated television series that aired on Teletoon in Canada from June 2, 2001 to September 1, 2004, and Fox Family Channel in the United States. The series was produced by Nelvana and Jade Animation, with actress Alicia Silverstone of Clueless fame serving as executive producer.

Brace position: To assume a brace or crash position is an instruction that can be given to prepare for a crash, such as on an aircraft; the instruction to 'brace for impact!' or 'brace! brace!' is often given if the aircraft must make an emergency landing on land or water.